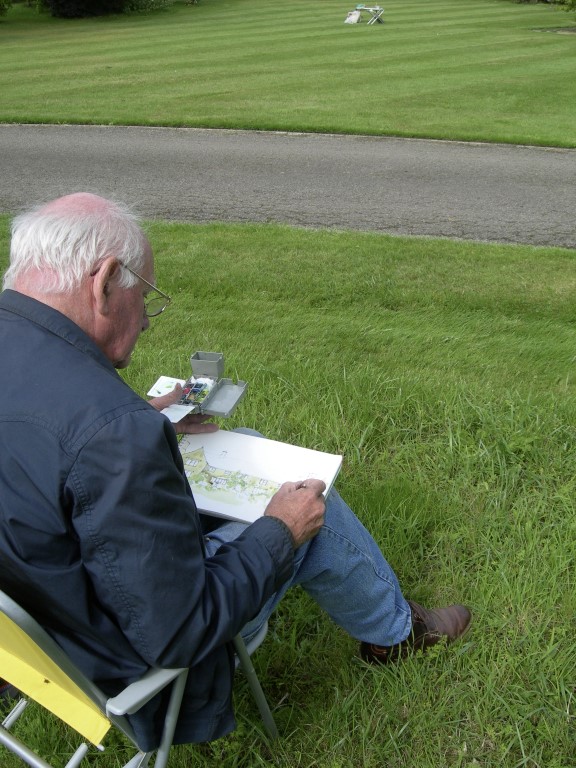 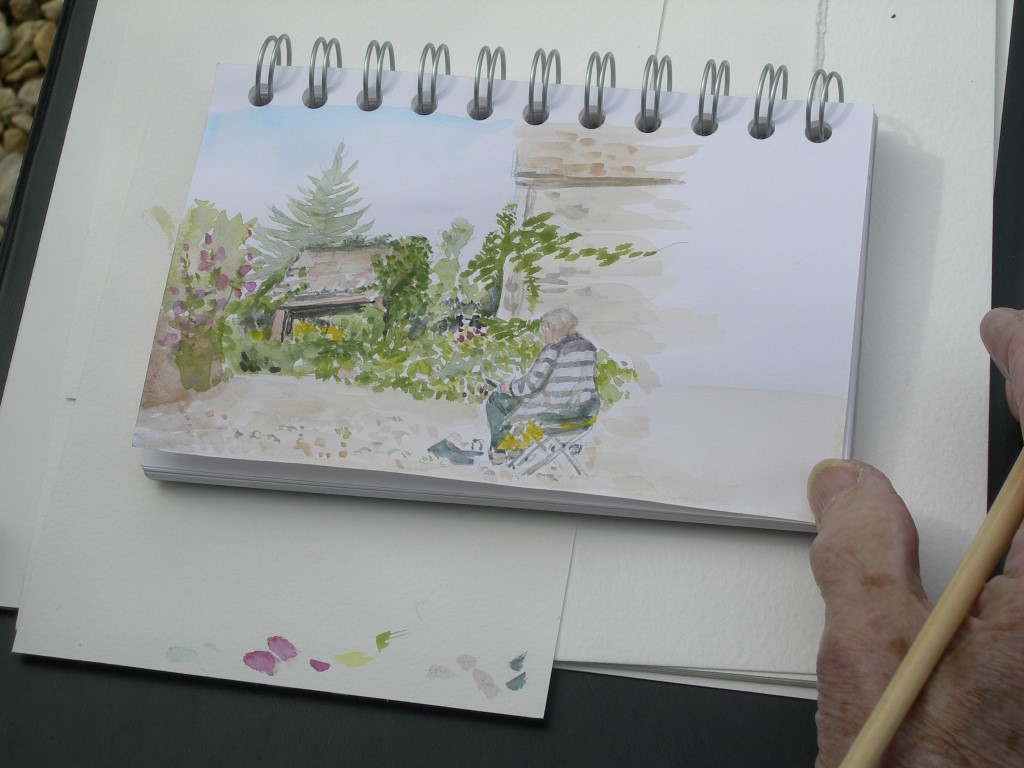 Today, thermal underwear and thick warm socks were required to start with to protected us from the cold winds. But, Reg, Dorothy, Marion and myself enjoyed a wonderful atmosphere, and quite a bit of sunshine. The chickens were clucking away behind the house, and Sarah was picking figs from her enormous fig tree – I have never seen such a big one! – Kati 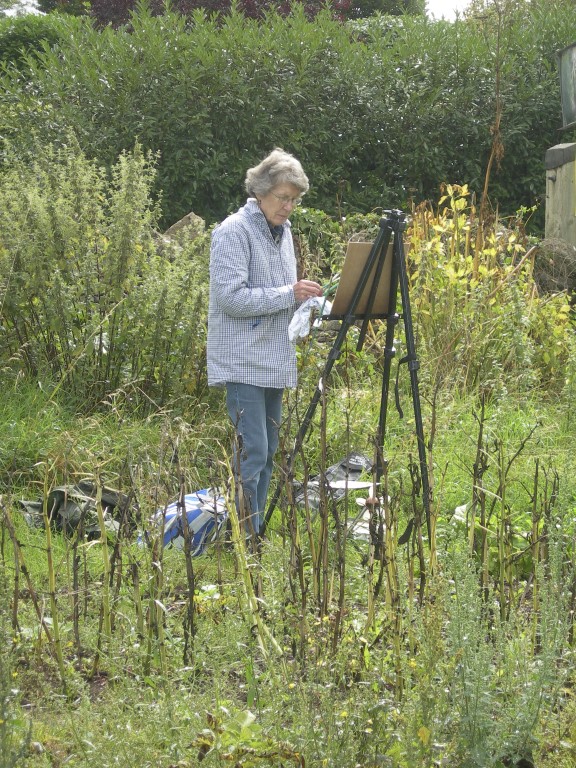 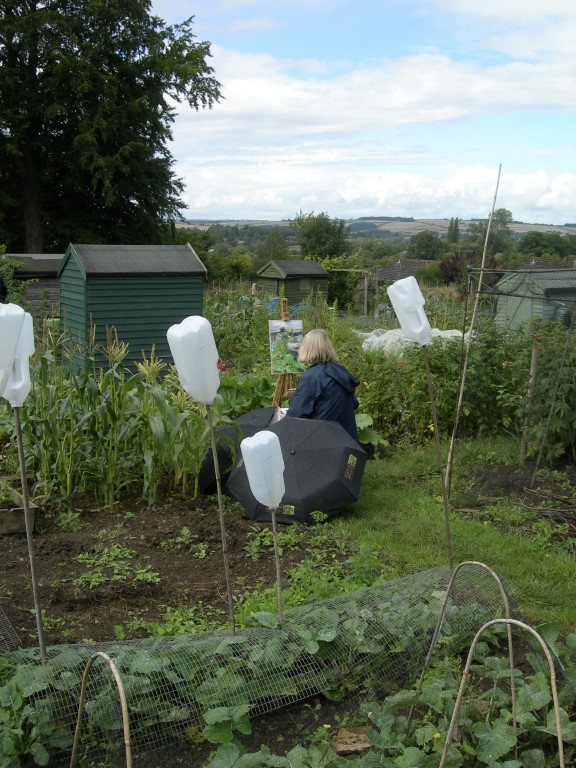 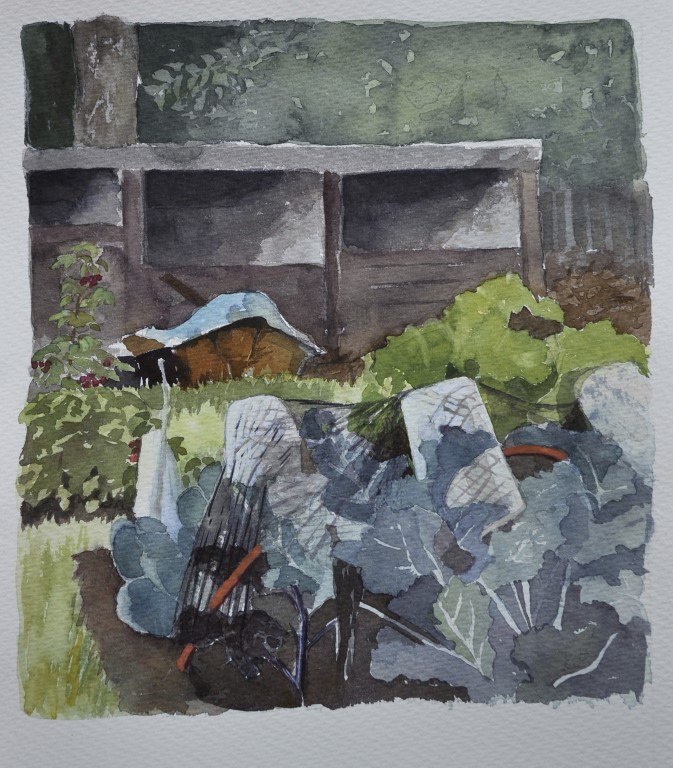 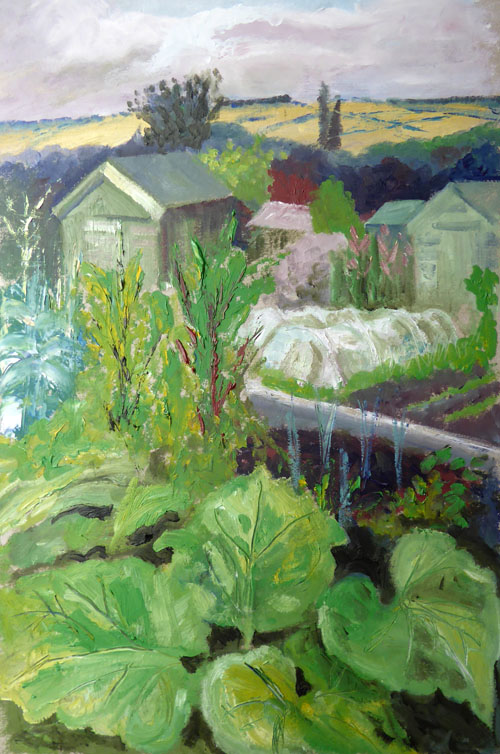 The day started with glorious sunshine. But, as you can see on the photos, the rain was never far away. So, Maureen had her umbrellas handy, and even painted with one hand holding up the umbrella! When the first rain came, Sarah very kindly asked us in for a much appreciated tea and a chat. It was beautiful in the gardens – the thrush came to say hello, one of the gardeners came by with a wheelbarrow full of wonderful, huge, red potatoes. We had a lovely time. – Kati 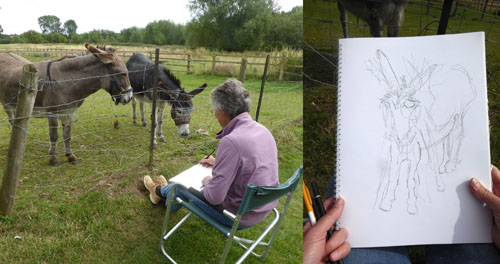 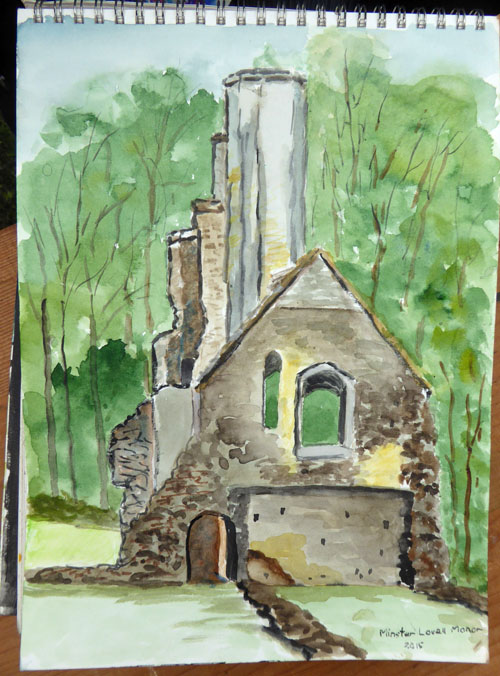 Twas a beautiful sunny August morning as I wandered down the lane with my canvas artbag and easel ready for a morning’s painting.  Kati waved from the old ruins behind the church as I approached and wow what an amazing spread of ancient buildings, complete with growth on stone window ledges.  Plenty of scope here for painting, including the church, the river, views across the landscape, mature trees… and two donkeys!  Five of us settled to paint until the rain drove us away at 2 o’clock on the dot as expected.  Many visitors walked past and admired our work during the morning including a team of cyclists complete with lycra and a tour group with rather a loud guide.  But our favourites were two small children who were particularly interested in what we were doing and the little girl explained to Kati how to mix black!  Meanwhile Sue enjoyed experimenting with a loose sketch of Sydney the donkey, and Judith painted the ruins from the other side. – Maureen

I’ve been eagerly looking forward to painting at Lees Rest as, in all the years I’ve lived in Charlbury, I’ve never been to Nick and Sarah Potter’s farm in the idyllic spot high up just outside Charlbury.  I arrived in drizzle which looked to be persistent, however I managed to set up just under the cover of an open woodshed to paint my scene of the old well and side of the old cotswold stone farmhouse with herbaceous beds and a backcloth of mature trees.  With the absence of both Kati and Marion because of other commitments, sadly only one other artist turned up and she didn’t stop to paint but it was nice to have the company for a bit.  Sarah has kindly welcomed us to come again in improved weather conditions.  There is plenty of scope for inspiration including some beautiful trees, farm buildings, plants and distant cotswold views.  There is even provision to paint under cover!  The result of my endeavours below… trying hard to make it sunny day!  Maureen. 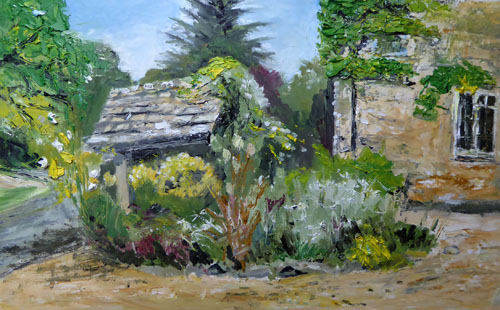 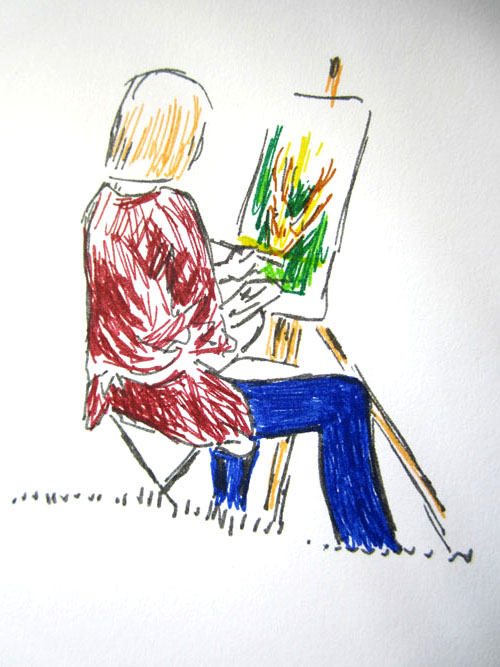 On Thursday this week (6 August) we spent our second painting day in the beautiful garden of the Priory in Charlbury.  There were just four of us and we spent half an hour just exploring before settling down in various parts of the garden.  One of the many stunning metal sculptures was to be the inspiration of two artists, while a third settled by the ornamental pond near the house.  I was intrigued by the way the light caught the orange coloured bark on a tree down in the woodland area and here is Marion’s sketch of me painting.  Again, so peaceful, you could almost expect a deer to walk between the trees.  We had the good fortune to see a pair of Great Spotted Woodpeckers hopping around in one of the trees near a bird feeder. 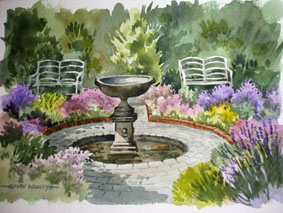 On Wednesday this week (5 August) we spent the first of two painting days in the beautiful garden of the Priory in Charlbury. What a privilege to have this stunning place all to ourselves! The peace of the garden is balm for the soul; just the sound of the wind gently blowing through the leaves, and birds chirping away. We painted, we had lunch, and we painted some more – what a beautiful day we had!  (Sue Woolley’s painting)

What a difference a week makes!  Six artists enjoyed a beautiful summer’s day on Thursday 30 July in the stunning grounds of Rousham House.  We painted mainly around the walled garden and the Pigeon House area where there was an overwhelming amount of inspirational subject matter.  However after several hours of painting and a lunch together on the Parterre where we were joined by one of the hungry peacocks, some of us ventured further afield and wandered into the formal front gardens where the lawns fell away to ancient woodland and beautiful sculptures were to be found along the way.